Don Tillman, a socially-awkward genetics professor at an Australian university, decides he needs a wife. In typical Don Tillman fashion, he develops an exhaustive survey to discover his perfect match. Along the way, he meets Rosie, who does not meet any of the survey’s qualifications.

I classified this as a Rom Com in book form. I think we all know where this is going.

John Ames is an aging Congregationalist pastor in a small Iowa town. The book is set up as a sort of diary written by John, who is dying of a heart condition, for his seven-year-old son. In this “diary” John describes daily events in his present-day, but also recounts his past including his childhood, first marriage, the deaths of his first wife and child, and how he met and married his current wife, Lila.

*NOTE: I describe this book as the first in a series, but the other books are more along the lines of companion novels rather than sequels. Home chronologically takes place in tandem with Gilead, but from a different character’s perspective. Lila, describes the early relationship of John & Lila through Lila’s point of view.

Although the lead male protagonists in both books have professions that require them to be leaders in their communities (professor, preacher), they both exhibit extraordinary ignorance and often come across as oblivious, especially in social situations.

In The Rosie Project, it is implied that Don has undiagnosed Asperger’s syndrome. He is highly intelligent but has a hard time deciphering social cues and taking other people’s feelings under consideration. This sets the stage for much confusion and hijinks—from arguments about the importance of ice cream flavors to lively staff dances to physical altercations with waiters. And of course, there are the live lobsters. He also has a very strained relationship with most of his colleagues and students. One of Rosie’s positive qualities is her ability to call Don out on his unintended shenanigans and show him where things went awry. As the novel progresses, he does make small progress socially, but in the end Don is still Don, which is part of the point.

In Gilead, John’s misinterpretation of events is hard to spot, since the narrative is presented as a journal written by Pastor Ames himself. If you read the two companion novels, however, it becomes very clear that John’s view of the world doesn’t always quite line up with reality. One of John’s big preoccupations is with Jack Boughton, the grown son of John’s best friend. John spends much time recounting Jack’s past digressions and anticipating more. Meanwhile, those same events are described very differently by Jack’s sister Freedom in Home. John’s courtship with his second wife was likewise experienced very differently by the other party involved, as evidenced in Lila.

These novels showcase the ease with which the same events can be interpreted by different people, particularly when one of those people misses certain social cues or misreads body language or intentions. Such misunderstanding can lead to amusing situations as seen in The Rosie Project, or cause heartbreak as in Gilead.

Charles Dickens by Claire Tomalin and Champion by Marie Lu 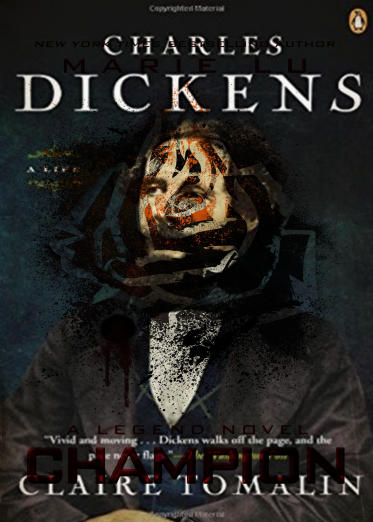