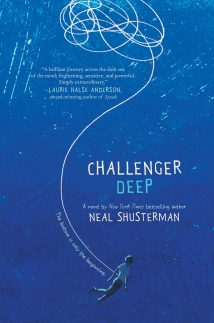 Winner of the 2015 National Book Award for Young People’s Literature, this book is narrated by Caden Bosch, a fifteen-year-old boy with schizophrenia. The narrative is very fluid and slips between Caden’s actual life with his parents and sister and the world inside his head. Time is also very fluid in the book—particularly in the beginning. Caden’s hallucinations take the form of a galley ship bound for the Marianas Trench, specifically Challenger’s Deep, which is the deepest part. The Captain of the ship represents Caden’s illness, the more time Caden spends with the Captain, the less lucid he becomes.

*NOTE: I read this book for Book Riot’s 2016 Read Harder Challenge, Task #24: Read a book with a main character that has a mental illness.

The Particular Sadness of Lemon Cake

This is the story of Rose Edelstein, who is nine when we first meet her. In fact, on the week of her ninth birthday, Rose discovers she has a very unusual gift: she can taste emotions in food. Not only that, as time goes on she can pinpoint where certain ingredients were grown and how they were prepared. Rose doesn’t see this talent as a gift, however. Through her heightened sense of taste, Rose detects her mother’s deep sadness in her own birthday cake. As the novel progresses, her tastebuds will let her in on still more secrets she’d rather not know.

Warning: Mild spoilers follow in the form of small details or plot points.
Nothing major will be given away.

Both novels chronicle the life of a teenager with a big secret about how he or she perceives reality. They confide in almost no one, especially not to their parents.

Caden is a good student who loves to draw. He is in the process of designing a video game with two of his good friends. He has a hard time sleeping at night. He finds himself compelled to walk for miles at a time without any set destination. He can no longer draw the way he used to. As the schizophrenia begins to take hold, Caden finds himself in the “real” world less and less often as he spends more time with the Captain on his ship bound for Challenger Deep. Throughout this entire descent into the depths of mental illness, Caden never reveals his thoughts and visions to anyone, even though he notes multiple times that his parents, friends, and teachers are worried about him.

Rose, on the other hand, doesn’t have to try very hard to keep her own secret secret. Though her family cares about her, they are each wrapped up in his or her own problems throughout the novel. Her secrecy is partially to prevent others from questioning her sanity, but I believe it also stems from a sense of denial. Her very first experience tasting feelings—her mother’s despair in her birthday cake—is a traumatic experience and does not leave her eager for more. Also, Rose’s abilities give her almost-tangible proof that not all families operate the way hers does. Rose has a friend whose parents love her very, very much. When Rose occasionally eats a sandwich from her friend’s lunch, she tastes not personal problems, but pure love for one’s child. Although Rose covets these sandwiches, they also serve as a painful reminder that, unlike her friend, Rose is not on the top of her parents’ list of priorities. And so, Rose Edelstein keeps her unusual talent a secret and finds solace in various forms of junk food which, having been made mostly by machines, carry very few emotions in their brightly colored packaging.

Although Caden’s unconventional experiences are portrayed as hallucinations, while Rose’s are depicted are real, both kids find themselves dealing with highly unusual realities. More than that, both characters choose to keep their experiences to themselves. True, Rose does ask her brother and his friend for their scientific opinions when her gift first manifests, but for the most part, everyone else is in the dark. Without anyone to confide in, both Caden and Rose find their entire lives affected by their secret selves.

NOTE: The title of this post is a reference to that time someone left the cake out in the rain.